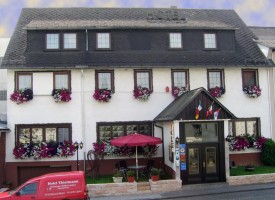 After one year of construction Alwin and Ilse Thielmann opened the guesthouse Thielmann on April 17th 1964. Back then, the hotel consisted of 10 guest rooms. In 1970 the owners already had to expand the house. A building extension became necessary and our hotel gained 10 more rooms, a small hall and 4 garages. Alwin and Ilse took the opportunity to take over a motorway service station in 1980 and handed the family run hotel over to their son Gerd and his wife Annemarie. Only two years later, they also expanded the restaurant to open the “Walliser Stuben” and the “Hessenstube”. Over the following years all rooms were modernized and equipped with showers/toilets and television sets – after these refurbishments our hotel was granted the distinction “2 Stars Superior” of the German Hotel Classification.

Since 2007 the hotel is lead in third generation by Mario and Tanja Thielmann. After further modernizations we gained the 3rd star of the German Hotel Classification in June 2009.